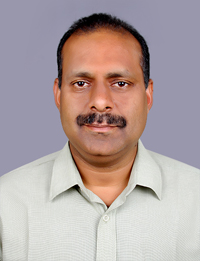 
Prof. Junaid Bushiri received his Ph.D. degree from Kerala University in 2000. Before joining the Department of Physics, CUSAT, in 2006, he worked at Korea Advanced Institute of Science and Technology Korea, Academia Sinica, Taiwan, Department of Electronic structure at Institute of Molecular Science, Okazaki, Japan and Department of Physics University of Kerala. He also worked at the Department of FisicaAplicada, University of Valencia, Spain from May, 2009-May 2010. He served as the Head of the Department of Physics, CUSAT, from 02-11-2016 to 01-11-2019. His areas of research include Crystal growth, Semiconducting thin films for optoelectronic and luminescent applications, Nanomaterials for electronic, magnetic, electrochemical sensing, environmental, biological and energy applications, Biological materials, Raman spectroscopy etc. He has 58 publications in national and international journals and 62 papers in conference and seminar proceedings. He has completed two research projects funded by KSCSTE, Government of Kerala; eleven students completed M.Phil degree under his supervision. Eleven students were awarded Ph.D. degree under his guidance.