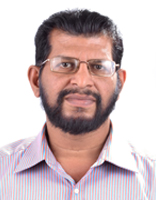 
Dr.M.K.Jayaraj received the M.Sc. degree in Physics from Cochin University of Science and Technology in 1984 and the Ph.D. degree in Physics from Cochin University of Science and Technology in 1990. From 1990-1991 he worked at Physical Research Laboratory where he was involved the measurement of electron molecule scattering cross section. 1991 he was awarded the SERC Young Scientist Scheme by department of science and technology to work on Thin film electroluminescent devices at Regional Research Laboratory, Trivandrum. Dr Jayaraj has been a visiting Scientist to ENEA, Italy during 1994-95. He was awarded the European commission fellowship to work at University of P et Marie Curie during 1995-96. From 1999-2001 he worked at Oregon state university where he was involved in the development of p-type transparent conducting oxides. He has also worked as a visiting professor at Tokyo Institute of Technology, Japan. His specialization and research focus is in the area of Optoelectronic materials and devices. Recent research interests include Nanostructured devices, transparent electronics, Ferroelectric thin films, Electroluminescent Devices, Laser and RF plasma studies.